Stain System is an asset that allows to add splatter effects like paint, dirt or blood to Unity games. The asset includes scripts, shaders, textures and prefabs as well as demo scenes and presets that show how to use Stain System. 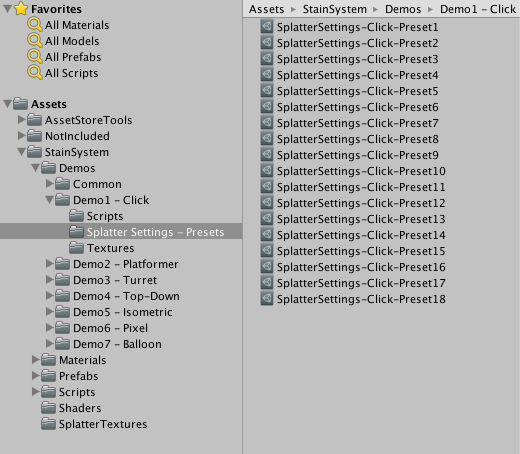 When developing Stain System we tried more than 10 different ways to perform a simple task – render as many as possible particles on a surface without overflowing into neighbour spaces. We have come up with a robust and flexible solution which is a combination of two techniques – using bitmap textures or a single mesh with custom shaders to draw splatters. While this allows to adapt the system to most applications and assures optimal performance, Stain System is not a simple drag-and-drop asset. Using it requires a selecting one of the two rendering methods and in some cases using a provided material on your game assets.

Once you have decided on the approach that best suits your game, you can follow the instructions in one of the sections below. Note that bitmap and mesh splatters can be mixed together in the same scene.

Note. The Demo Scenes included in the Asset package are represented in both Bitmap and Mesh modes. 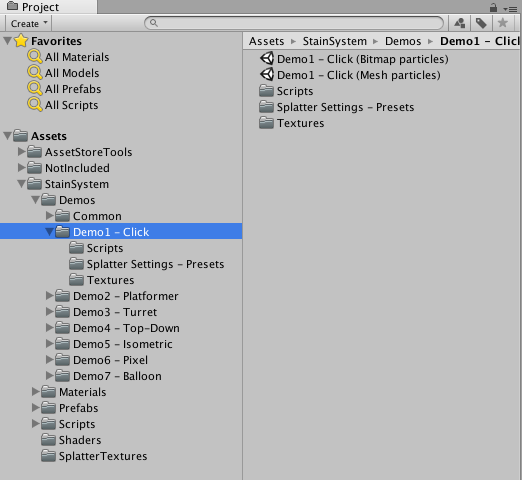 Here is how to use bitmap splatters:

Here is how to use mesh splatters:

Hint. If you want more splatters at lower resources cost – use the complex texture that already contain the variety of “splatter debris”. Use either the ones that come with the Stain System asset, or prepare custom splatter textures. See Example – Click Scene – Presets 2, 8.

Splatter Settings is a reusable configuration file that describes how splatters behave and look. To create such file right-click anywhere in the Project window and select Create ▶︎ SplatterSettings. A new file will appear in your project that can be dropped into the Default Settings field of SplatterSystemBitmap or SplatterSystemMesh or when calling the Spawn method on either of these components. Explanation of each parameter is included in the Inspector view of the settings, to view them, check the Show explanation box at the bottom of the settings inspector. 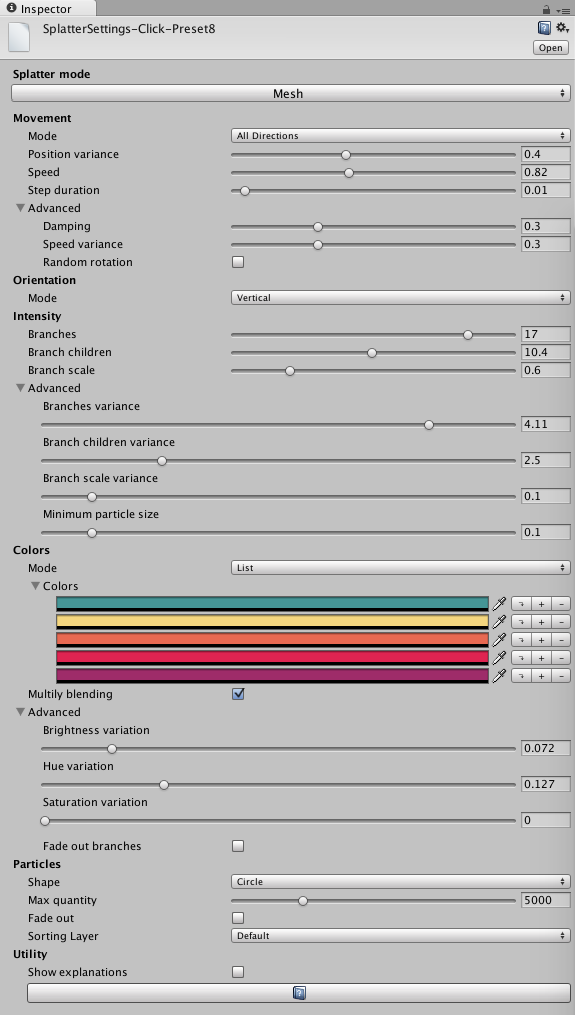 Below is the screenshot of the Splatter Manager Inspector Panel with Show Explanations engaged.

< Go back to Stain System page